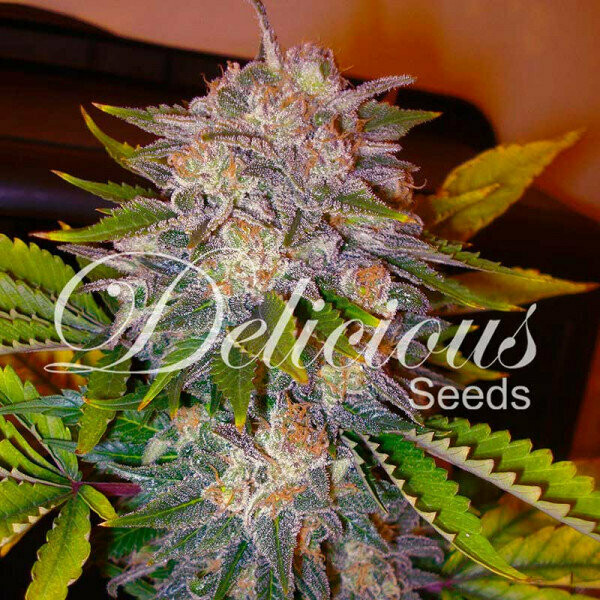 The Caramelo (DS20) is the spectacular result of a selection of the best Indica and Sativa puppet types of lavender (Super Skunk x Big Skunk Korean x Afghani x Hawaiian), making it an exceptional plant in the cannabis market. Naturally endowed with a great genetic diversity, the Caramelo unites the traits of a Hawaiian, an Afghan, a Colombian and a Mexican - but that's all!
The Caramelo (DS20) is a mostly Sativa, although it looks like an indica dominant hybrid at the beginning of its growth. After a few weeks, the sativa genus will also be fully effective and let the caramelo grow to a stately size. She responds excellently to circumcision and thrives excellently a ScroG.
In order to achieve their maximum performance in outdoor cultivation, the Caramelo needs a certain size, so it should be used relatively early. If more medium-sized plants are desired, the germination time can be postponed by a few weeks.
The aroma that surrounds the flowers of the Caramelo (DS20) is incredibly flowery and sweet. It is accompanied by subtle musk notes and rounded off with a dash of lavender and sweet licorice.
The taste is haunting and sweet. Conoisseurs will taste the traces of nutmeg and skunk.
The effect of Caramelo (DS20) is relatively strong and typical Sativa. After a few moves, the mental, euphoric high develops, which only gives way to a sense of balance after some time. Thus, the caramelo is intended for medico use, when it comes to alleviating mental upsets.

Save this product for later
Display prices in: EUR